Why Does Turkey’s Fight Against Covid-19 Draw Much International Attention?

As a rising star of medical tourism, Turkey has been appearing a lot in many media channels on how successfully she has been fighting against Covid-19.

The first Covid-19 case was diagnosed in Turkey on the 11th of March, 2020. After seeing the effects of Covid-19 in Europe, many were worried if Turkey would be the same as Italy. But fortunately, Turkey’s Ministry of Health and its dedicated medical team did not allow the pessimistic scenario to happen.

The fight against Covid-19 is not completely over yet. But so far, Turkey has been so successful in the containment and treatment of Covid-19 that this success made the headlines in international media and was acknowledged by the international authorities.

So, as MCAN Health, we have compiled the views of different authorities and international media agencies to better understand Turkey’s success in pandemic management in this blog piece.

The World Bank acknowledges that ‘Turkey has quickly adopted measures to help contain the spread of COVID-19 and save lives…’.

And the statistics confirm the World Bank’s statement. Turkey has one of the lowest mortality rates compared to most European countries and the US. 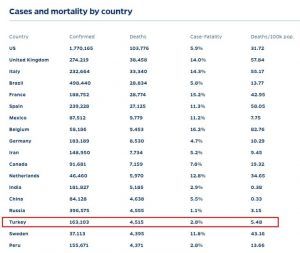 The statistics above are taken from John Hopkins Research Center

While most European countries and the US have seen a record number of mortality rates, how Turkey, with one of the highest Covid-19 infection rates in the world, managed to contain and control the outbreak?

What is behind these low numbers of Turkey?

The former US diplomat Matthew Bryza highlights some of them in his report issued on 27th of May by Atlantic Council which is a think tank institution in the USA.

He says that the Government’s approach to the pandemic, young population, an unusually large number of ICU beds in hospitals, and the fact that elderly generally taken care of at home by family members are the reasons behind this success. He adds “given that US President Donald J. Trump seems to genuinely admire President Erdoğan, maybe he can learn something from his tough counterpart in Ankara”.

Turkey’s way of fighting against Covid-19 has been different and seemed to work well. Therefore, this success is acknowledged not only by international authorities but also by various international media channels.

BBC and CNN reported exclusively on Turkey’s Covid-19 strategy; and they have been to the ‘heart of Turkey’s coronavirus outbreak’, the busiest ICU (intensive care unit)  units. Along with BBC and CNN, many other media outlets in different countries made news on Turkey’s pandemic management. 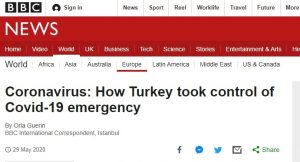 The news is taken from BBC

“The battle for numbers: low death rate in Turkey” The news is taken from Institut Montaigne

“Turkey is a fairly small club of countries that have been quite effective in reducing the viral spread. Turkey fits in the category of several countries that responded fairly quickly with testing, tracing, isolation, and movement restrictions” Dr Jeremy Rossman, Lecturer in Virology at the University of Kent has told the BBC.

As well as introducing lockdowns and movement restrictions, Turkey started tracing the virus from day one. Not only people with Covid-19 symptoms but also people who have been in contact with Covid-19 positive cases were tested and isolated quickly. This helped to contain the spread of the virus.

The BBC quotes from the acting head of the World Health Organization (WHO) in Turkey, Dr Irshad Shaikh: “Initially we were worried, they were having 3,500 positive cases per day. But what has worked is testing. And they did not have to wait five or six days for results.” 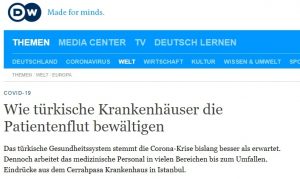 Turkey’s treatment approach to Covid-19 cases has been described as “early” and “aggressive” by one of the chief doctors in Turkey whom BBC interviewed. Thanks to early and aggressive intervention, most patients have been recovering without needing ventilators and intensive care. CNN emphasises that since the very beginning of the outbreak, unlike other countries, Turkey has embraced a different approach in the treatment of Covid-19 cases. Some drugs along with blood plasma and oxygen in high concentrations are used to treat the patients. CNN reports that the doctors in Turkey have also been delaying intubation by using high-frequency oxygen for a longer period of time.

One of the doctors interviewed by CNN says: “rather than having our patients lying face-up, we are keeping many in the prone, ie face down, a position which has yielded positive results as well. And Turkey has started using plasma from patients that already contracted the disease on those that are still fighting it.”

“We feel we are in a war. People forget to go home. We say ‘OK eight hours is completed’ but they don’t even care about going home because they know this is a duty they have to complete before it spreads to anyone else’ Dr Melek Nur Aslan tells the BBC and adds “we could use the decades of experience tracking measles during this outbreak.”

The number of intensive care unit (ICU) beds per person in Turkey is higher than in most European countries, the US, and China. Therefore, Turkey has not experienced a shortage of ICU capacity even when the number of cases has peaked. On the contrary, Turkey has sent ventilators to the countries in need. As CNN says: “Turkey’s hospital system is so good that the country has become a medical tourism destination.”

The news is taken from CNN

“While many countries were looking mostly inwards, Turkey has also supported other countries with much-needed testing and PPE [personal protective equipment] supplies”  said Dr Irshad Ali Shaikh from the World Health Organization (WHO) while thanking Turkey for showing solidarity with the rest of the world.

Since the beginning of the outbreak, Turkey has sent supplies that are crucial in the fight against Covid-19 to many countries including the UK, Spain, the US. On each aid box, there was also a quote by Sufi poet Mevlana Jalaluddin Rumi, saying: ‘after hopelessness, there is so much hope and after darkness, there is the much brighter sun’.

As MCAN Health, as every one of you, we see the brightest days are coming. Even though we started to go back to our routines, we still need to apply the new normal rules such as wearing masks, keeping physical distance and washing our hands more often than before. However, life must go on. With social responsibility and accountability, with solidarity, nothing can stop us, not even Covid-19! 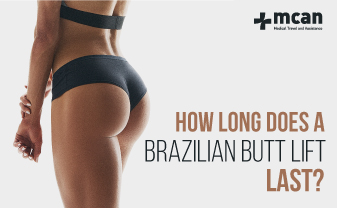 How Long Does a Brazilian Butt Lift Last? 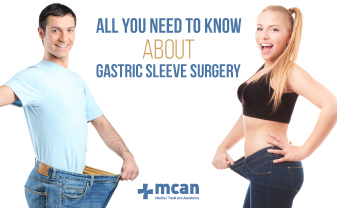 All You Need to Know About Gastric Sleeve Surgery