An Important Announcement About COVID-19: MCAN Health continues offering its services to patients and helps them to book their treatments. Both video and audio consultations are available. Read More
Read More
May 11 0

Kimberly Kardashian West has become famous with the reality show called Keeping up with Kardashians. Since then she became a mum, businesswoman, social media influencer with 169 million Instagram followers!

In 2015, Kim Kardashian was the highest-paid reality television personality, her wealth was estimated to be more than USD 53 million. In the same year, Kardashian was on the 100 most influential people list of Time Magazine. And the Vogue has rightly described her as a ‘pop culture phenomenon’.

Indeed she is a pop culture phenomenon. People take an example by her; the things she does and says. Along with Time and Vogue, we would like to add one more ‘description’ for Kim Kardashian which we think will well suit her: ‘the Queen of Plastic Surgery’.

Before Kim Kardashian, we would not really envy women with big bums! To be honest, women with big bums were ‘dying’ to have smaller bums that are more proportional to their body. However, Kim changed the whole perception of big bums. Thanks to her, having a big bum has become a ‘trend’ and something to envy. As a result, an increasing number of women wanted to have bigger bums and started undergoing bum lift or BBL surgeries globally.

We are rightly calling her as the Queen of Plastic Surgery because she really is. She is setting the tone in beauty and plastic surgery and people definitely follow suit. And not only ordinary people like us but also other celebrities. Kim, herself, is aware of this fact too. In one of her interviews, she has stated that she is like a ‘plastic surgery consultant’ in the celebrity world.

“People call me all the time, like really famous people, out of the blue and are like, ‘I know we don’t know each other, but I’ve heard you’re the expert and I’m looking to do x, y, and z. Who would you recommend?’” she has shared.

Undoubtedly Kim has a beautiful face and a unique look. But in her recent photos, we notice some incredible change on her face. And this change is not about time or maturity. Or not about contouring makeup as she sometimes claims.  It certainly is about some aesthetic touches.

Kim Kardashian’s Nose – Before and After 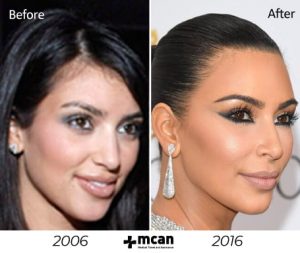 Look at her photo from 2006! She still looks beautiful but when compared to one of the recent photos, we see a different nose. In her recent photos, her nose appears to be shorter, thinner, and more proportional to her face. By the way, Kim has yet to acknowledge that she had rhinoplasty. She sometimes says that she is so good at makeup and contouring that her face looks very different when she wears makeup. But we are positive that this is not just about her contouring skills, she has had a nose job to enhance the shape and overall look of her nose. What do you think? 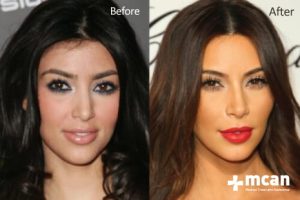 Another change in her look over the years is her overall facial look. Compared to before, she now has more defined facial features. Her lips and V-shape face have been so popular that people named an aesthetic procedure package after her! Yeap, and it is called the Kim K Package!

What is the Kim K Package? 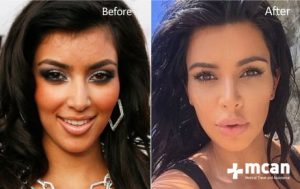 The KimK Package or Kimmy K Package is the name given to a facial filler treatment. This filler treatment involves the jawline, chin, lips, and cheeks. The fillers are injected in these areas to achieve more contoured face shape like Kim Kardashian’s. So, come on Kim, you even have a filler treatment package named after you, it is time for you to get over the secrecy about your plastic surgery journeys.

And, last but not least, let’s talk about Kim Kardashian’s famous curvy shape and bum! 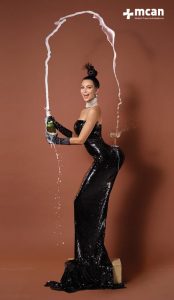 Her famous body curve and bum remind us of her picture that sparked much of debate back at the times when she first posted it. Yes, the one that she pops a bottle of champagne by holding a champagne glass on her bum!

We think that Kim definitely had body-contouring surgery including liposuction and buttocks lift. She had liposuction to remove fat from her sides and to achieve a slimmer waist and used this fat to enhance her bum.

Although Kim has pioneered a big bum trend and curvier look around the globe, surprisingly she has never admitted that she had liposuction and a bum surgery.

On the contrary, in 2011, Kim said: “I’ve said numerous times ‘I haven’t had plastic surgery, I haven’t had butt implants” and shared an X-Ray of her buttocks with the viewers. The X-Ray has proved that there are no implants in her bum.

There are also rumours that she had butt implants first but then had them removed and chose to have liposuction and BBL instead. 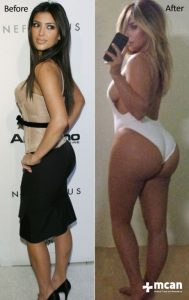 Judging from her before and after photos, we think that she has undergone a body-contouring surgery consisting of BBL and Liposuction. And we are very sure about it!

Body contouring with BBL (Brazilian Butt Lift) and liposuction involves fat collection from the waist and fat transfer into the buttocks. Your fat is collected from other parts of your body via liposuction and injected into your bum. 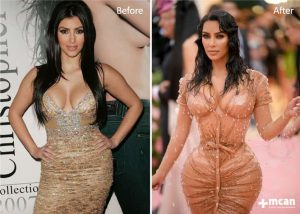 The world is still ‘keeping up with Kardashians’, especially with Kim Kardashian. Soon she is becoming 40 and still setting the pattern for beauty and plastic surgery trends globally even if she does not acknowledge she had one. ☺

Are you also interested in enhancing your beauty? You certainly do not have to be a Kardashian to do that. Please contact us for high-quality plastic surgery treatments for affordable prices.